We have reached the second stage of the lengthy process which will lead to a new six-year County Development Plan for the whole of Dún Laoghaire Rathdown County.

At the first stage in 2020, Imagine Dundrum made a substantial submission responding to the Council’s Issues Paper, and our members are now scrutinising the new draft with a firm focus on Dundrum itself, so we can make a similar response by the consultation deadline in mid-April.

Many local citizens contributed ideas to the 2020 consultation, and it is vital that as many as possible engage in this next stage. Because it is a large and complex document, with many technical aspects, Imagine Dundrum will be considering ways to make its contents more easily accessible and user-friendly, highlighting the areas most relevant to Dundrum. We hope to be able to provide a ‘way in’ for local residents before too long.

A Civic Centre for Dundrum

In January 2021 Imagine Dundrum is holding its breath while we wait for the announcement of a very important decision. Following the drawing up of a Community, Cultural and Civic Action Plan for Dundrum (yet to be published), Dún Laoghaire Rathdown County Council applied for funding to the national Urban Regeneration and Development Fund (URDF) for the provision of a Community, Cultural and Civic centre for Dundrum.

A positive decision would transform Dundrum and its surrounding area. Our urban village has been designated the second largest centre in the County, yet has been consistently deprived of the means to build a truly sustainable and inclusive community here.

Campaigning for a Civic Centre and new library at the heart of Dundrum has been central to Imagine Dundrum’s vision from the start. We are strongly supported by our local representatives and many local people and organisations, and are ready to engage with all the stakeholders if this dream becomes a reality.

For more information, read our campaign leaflet Dundrum Needs a Civic Centre and our more detailed submission to the consultancy process. 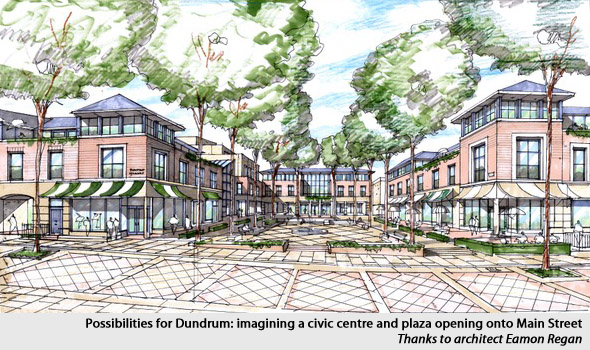 Challenging the Busconnects plans for Dundrum

Imagine Dundrum has followed closely and with considerable concern the development of the new Busconnects plans for future bus routes in and around Dundrum.

We made a submission to the National Transport Authority (NTA)in late 2020, making our view clear: the latest plans, which would turn Main Street into a busy bus corridor with almost 40 buses an hour running along it, are simply unacceptable.

These plans would seriously damage Dundrum Village as a liveable environment, and run counter to proposals in the Dún Laoghaire Rathdown County Development Plan, including ‘the provision of a pedestrian-friendly and traffic calmed-environment along Main Street’.  They also take no account of recent changes to Main Street which focus on the needs of pedestrians and cyclists.

As an alternative, we argue strongly for Northbound one-way bus traffic on Main Street by essential routes only, with most bus traffic using the bypass, where new stops can be provided, along with pedestrian access from Main Street.

A response received from the NTA in January 2021 informs us that detailed planning of new routes through Dundrum will not begin until the second half of 2022, and that our proposals will be seriously considered at that point.